I had a lot of fun in high school doing projects in our 700 seat proscenium theater. For an idea of what high school was like for me, check out this article from our school paper. Below is a blurb I wrote for my old high-school website about one the Wizard of Oz.

The Wizard of Oz

The Wizard of Oz was quite an undertaking. I served as “Technical Coordinator” and sound operator for the production. Although the school officially hired light and sound designers, I played a major role in both areas, designing the systems that supported the designers’ visions. I also designed a fairly complex video system which allowed us to project the wizard twelve feet high in only 9 feet of throw distance, without expensive lenses.

For the production, I rented a large inventory of equipment to augment our installed sound system. First and foremost, we needed better intelligibility in the front rows of house. A pair of JBL MS26 speakers provided low profile and a nice punch in the mid-high end; I powered them with a Crown Macro-Tech 1202 amplifier. To equalize the MS26’s, I used a personal favorite processor, the Sabine Power-Q. It has extremely powerful parametric and graphic EQ, compression, delay, and it even sounds pretty good for a digital unit.

To keep the four main characters louder than the orchestra, I used 4 Audio Technica 3000 series wireless lavalieres. Sonix has a local expert in RF
, and he created a frequency guide for me that worked incredibly well. Additionally, I used one of our existing Shure VHF lavs for special people to pass around. It wasn’t worth renting an additional unit just for a couple scenes. For ambient pickup, I rented four Crown PCC160s and used our existing 3 Audio Techinca ES933 chorals with cardioid elements on them. 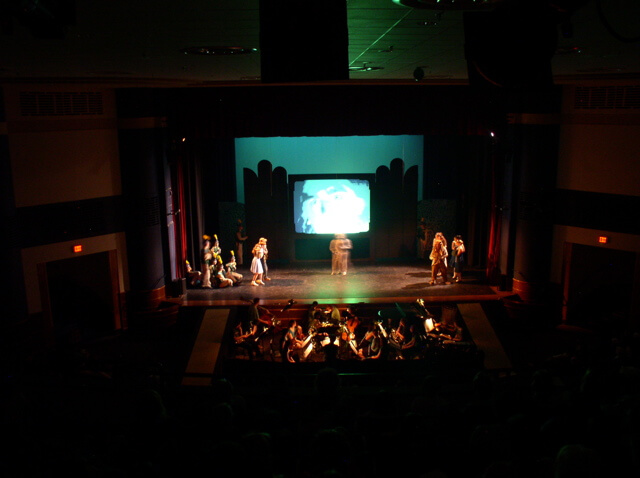 It was actually a pretty standard playback setup. We didn’t have enough going on to warrant the use of more than two output channels, so the internal sound card worked wonderfully. The cues were set up to run like a lighting board. For each sound cue, I hit the spacebar, and the machine executed fades, starts, stops, loops and other actions on 4 virtual playback decks. The sound effects themselves were designed masterfully by Tom Shread.

I am the great and powerful…

The video system served both as a “magic picture” for the wicked witch, and the Wizard’s primary mode of communication. There was a camera for each type of use. The witch’s camera was actually located in the audience for use by evil munchkins, and the Wizard’s was backstage on a tripod in his “studio.” I had to set up special lighting in both locations to give the best image, and allow the cameras to focus correctly. We also used a playback deck to show footage of the Wizard and Dorothy flying away at the end of the show.

For each type of video, I wrote presets in the mixer, which controlled distortion, pixelation, and color tinting. Obviously, I opted for a green wizard, and the set designer asked for a cool blue in the witch’s castle. During the show, the video operator would recall each preset, and then use editable parameters to add to the performance. For example, we would reverse the colors when the wizard yelled, and slowly alter the pixelation otherwise. The final effect was incredible; we had children screaming, adults ooohing and aahing, and received a round of applause each performance.